the making of ‘flight’

These are a few of the many photos we have taken to document the process, from beginning to final completion of the sculpture. We’ve censored out the ones which reveal either of us in particularly unflattering poses (we do occasionally remember to be vain). 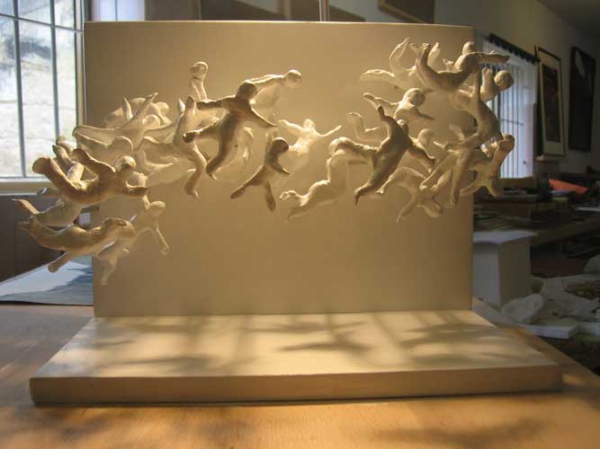 The maquette which won 1st prize in the MIA competition. One of our greatest concerns was to replicate the spirit, sketchiness and dynamics of the maquette in the actual sculpture 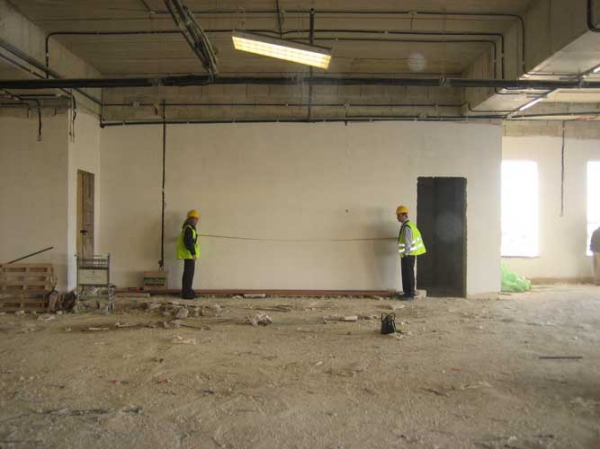 Measuring the space where the sculpture would be installed. The doors were eventually blocked up. 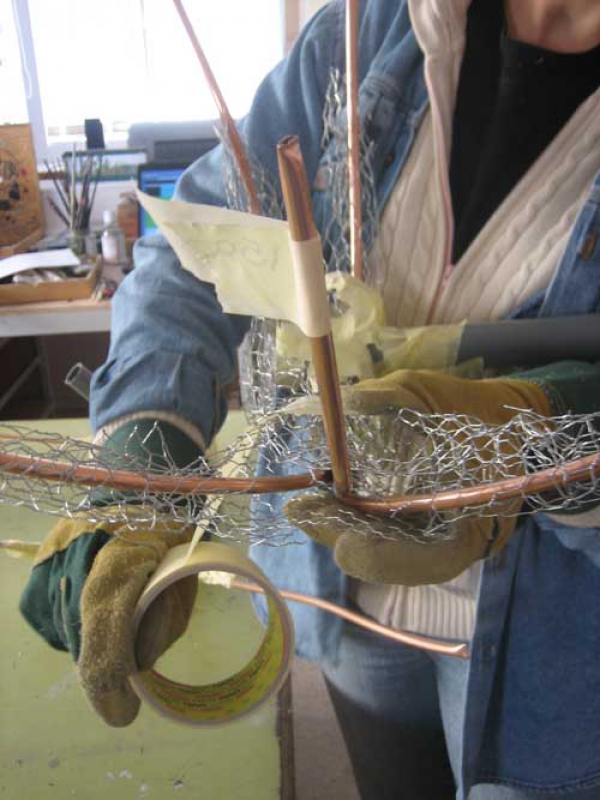 Preparing one of the 29 armatures!Bendable copper pipe formed the skeleton. This was encased in chicken wire, wrapped in masking tape and then filled with expandable foam. We made strong armatures, capable of taking the weight of the heavy almost unsupported ‘flying’ clay models. 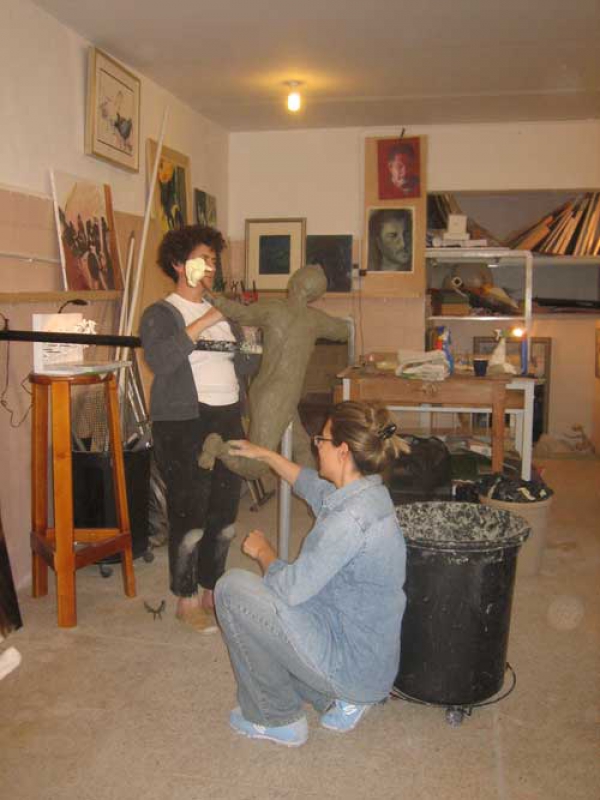 Building up a figure in clay. All work was done at Celia’s studio under the watchful eye of Smoke, the studio cat.

Sculpture by consensus: we both worked on the figures simultaneously and – miraculously – without arguing. 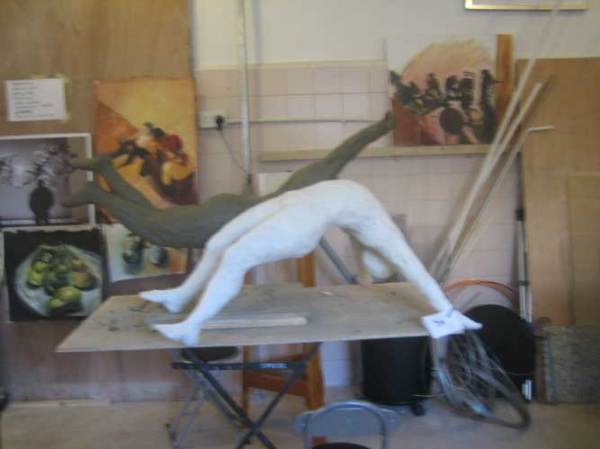 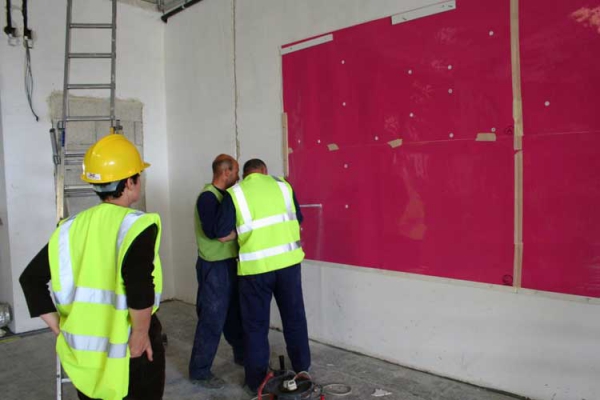 Supervising the drilling of the wall holes for the steel rods. 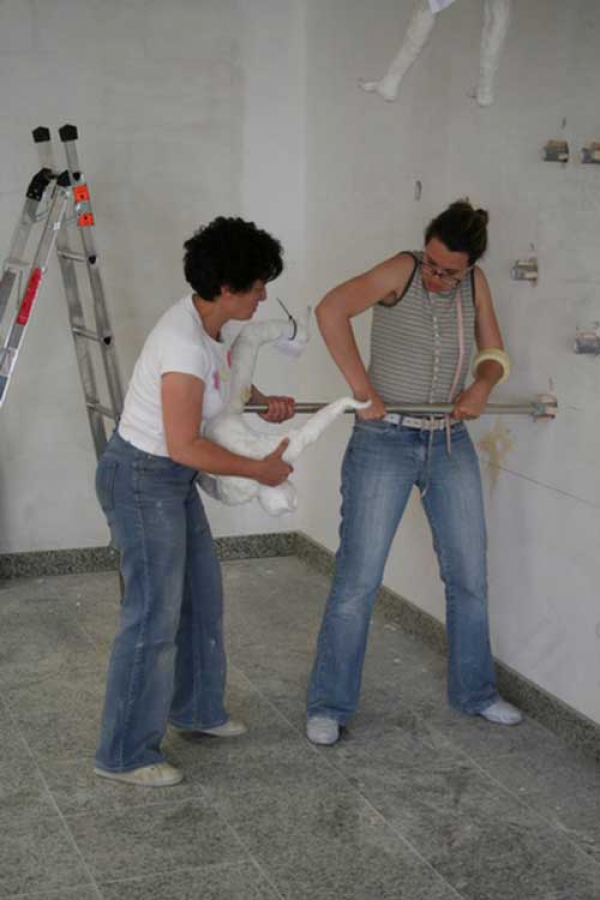 Trial hang: trying out the unpainted figures on site to ensure that the entire composition came together well. 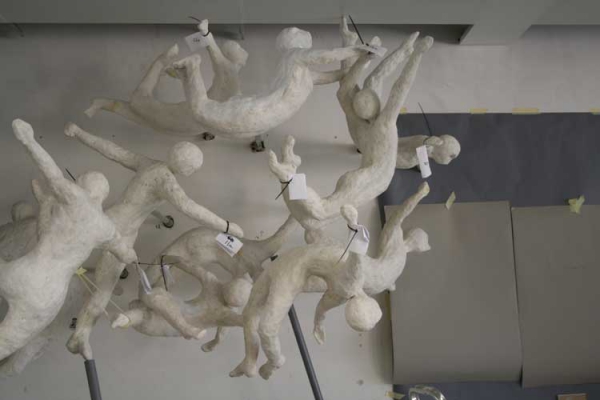 Tagged with individual numbers corresponding to their steel pole and the hole in the backing wall, the trial hang continues. Plastic conduit pipes are used to temporarily prevent swivelling on the poles. Grey paper is used as a trial to help us decide on a shade of wall paint for the wall flanking and framing the sculpture. 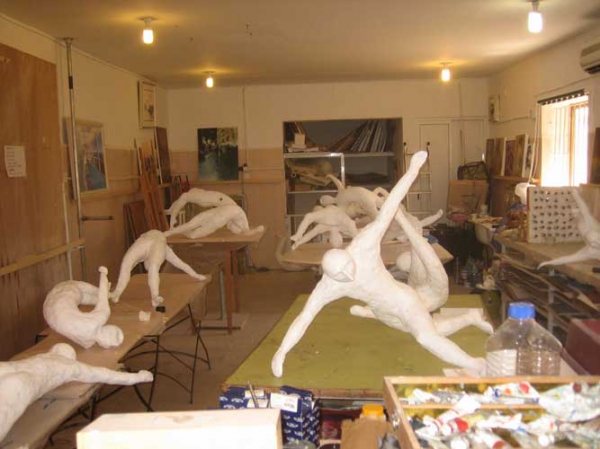 Back in studio, the figures are all laid out ready to be painted. 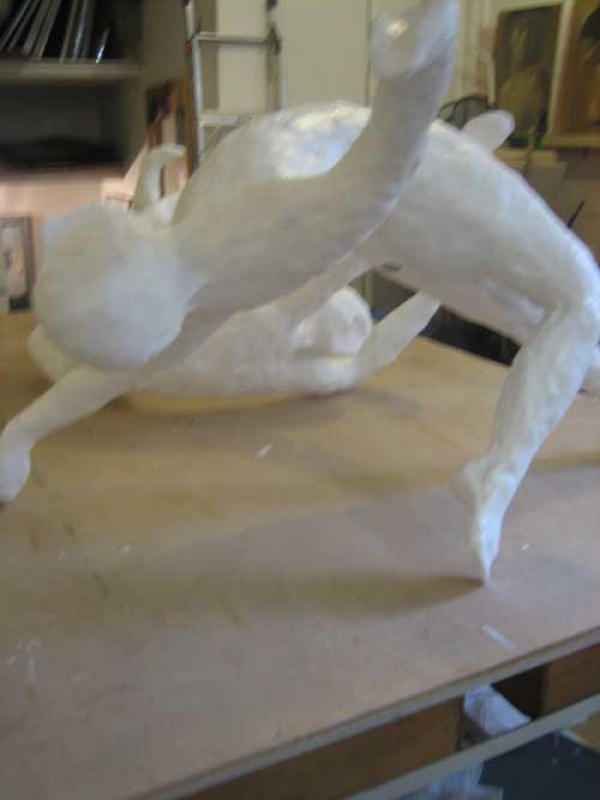 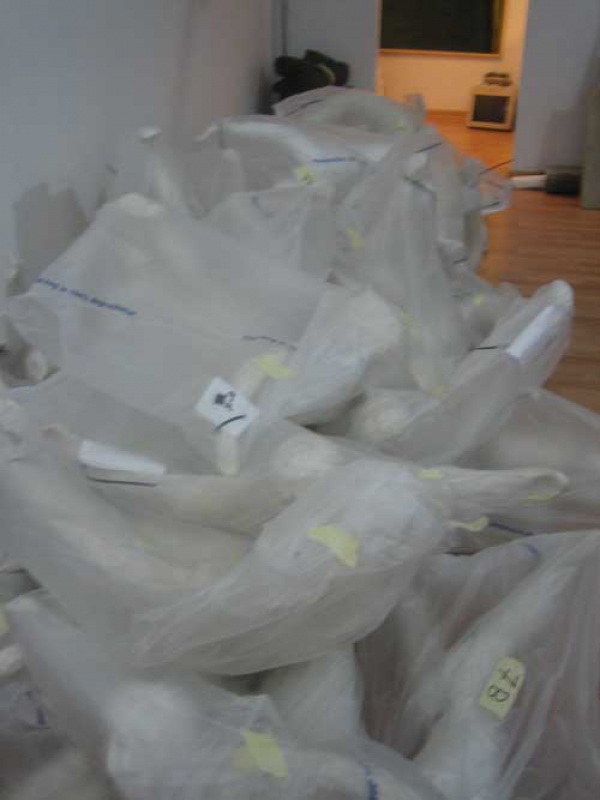 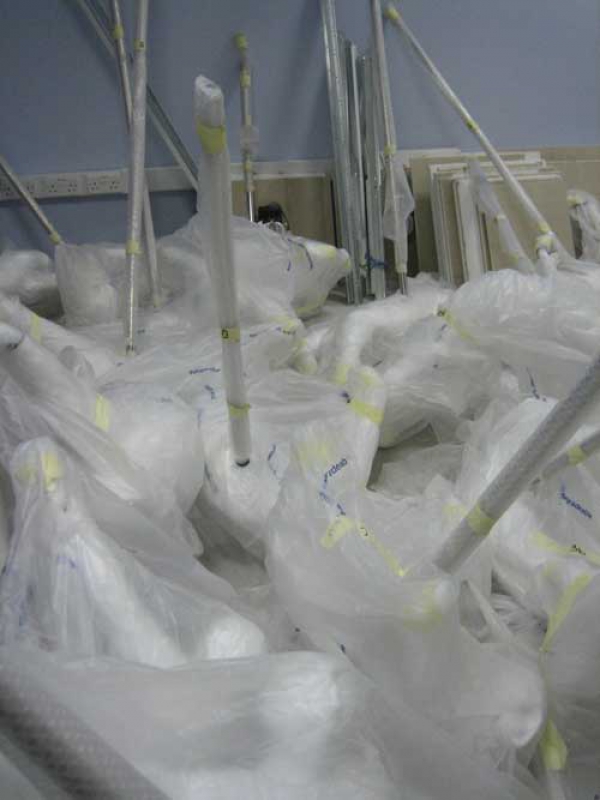 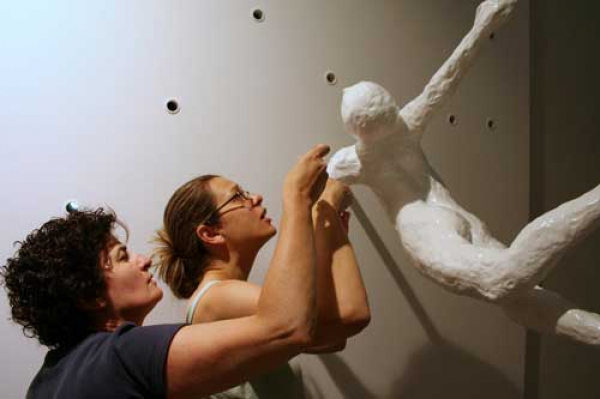 The first figure goes up: unwrapping the plastic and touching up the paint 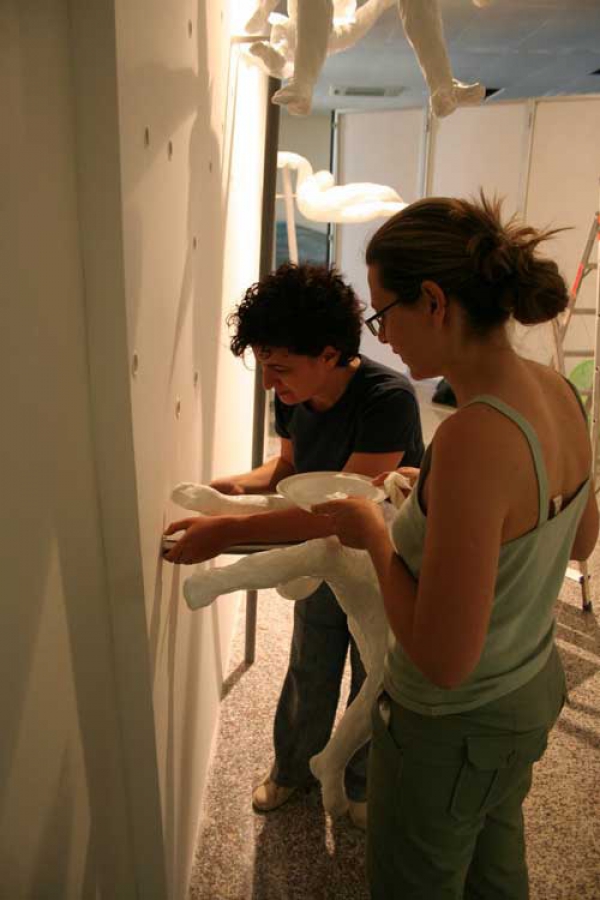 Touching up the gypsum backing panel. 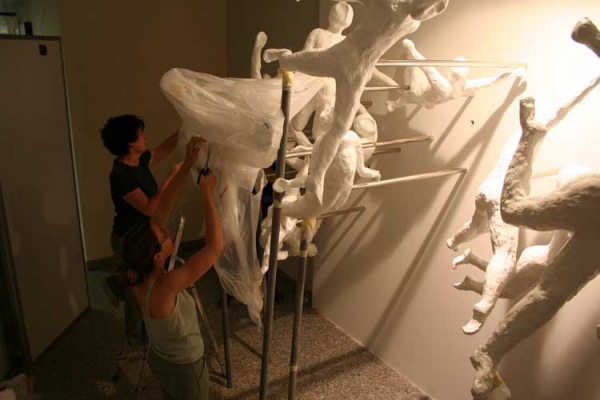 More and more figures go up. The process gets harder as more figures are mounted, there is less space for adjustment and hardly any space for us to navigate in 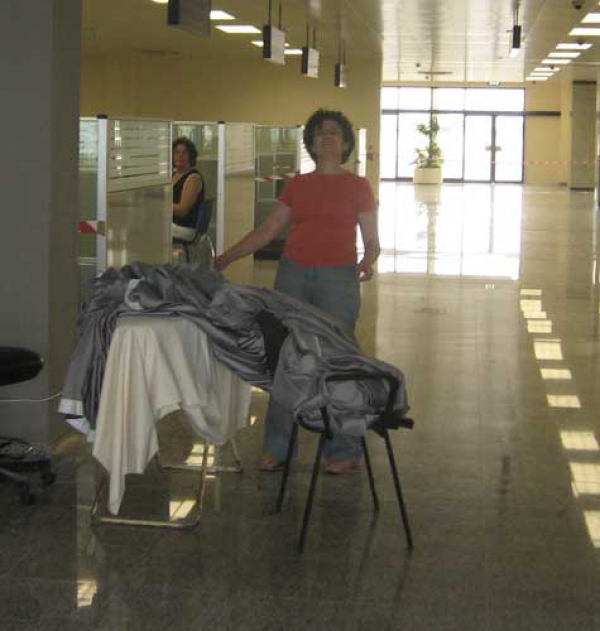 Finishing touches: somehow we got involved in the unveiling ceremony preparations….perhaps with rather too much enthusiasm. 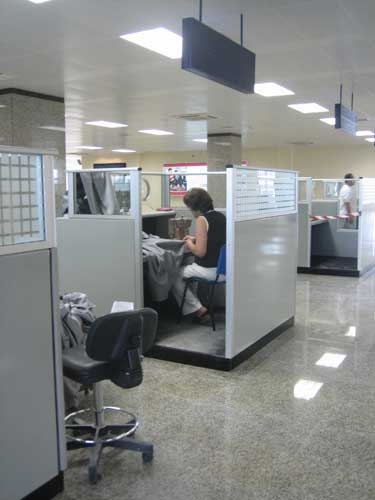 Connie the seamstress sewing the curtains for the unveiling at Passport Control!